Re: Calling "Science as a Vocation" Workshop 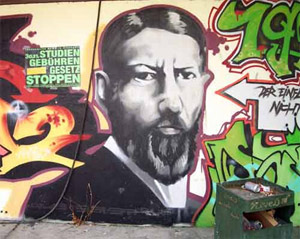 The Program in Science in Human Culture at Northwestern University plans an interdisciplinary workshop organized around Max Weber’s classic essay “Science as a Vocation.” The workshop will explore the relevance of Weber’s essay for scholars today, first, by examining its key concepts and arguments and, second, by rethinking these concepts and arguments in light of recent studies in the history, sociology, and anthropology of science. A panel discussion of the essay is scheduled for Thursday evening, and Friday will be dedicated to four working sessions on pre-circulated papers.

Weber originally delivered “Science as a Vocation” in 1918 as an invited lecture to students at the University of Munich. A well-known if polarizing figure among German academics by this point in his career, Weber used the occasion to pull together themes from his earlier writings and to play out their implications for the aspiring scientists in his audience. As Weber saw it, the logic of modern science required that practitioners stay unconcerned about the consequence of what they produced, and he warned students not to expect science to provide them with ultimate ends worth working towards. Although scientific training would allow students to manufacture knowledge that could be harnessed to satisfy moral commitments in other “value spheres,” like politics, Weber cautioned that a responsible scientist was necessarily unmoored from questions about the ultimate ends that his work might serve.

Despite Weber’s unrelenting insistence on the inherent meaninglessness of scientific knowledge, and indeed of the modern world itself given that “one can, in principle, master all things by calculation,” he nonetheless offered his listeners a glimmer of relief amid this portrait of “disenchantment.” A scientific specialist could derive inner satisfaction from a job well done by serving his vocation with integrity and discipline for its own sake. Thus the stalwart among his listeners, Weber encouraged, might find some measure of satisfaction in accepting “the inward calling for science”—science as a vocation—despite its glaring moral limits. After all, he had.

Weber’s lecture may have raised disquieting and unconventional ideas, but it was nonetheless recognizably a product of its time. The current workshop aims to embed Weber’s most distinctive ideas in the historical and biographical context in which they arose—and from which they are too often detached. Participants will explore, for example, the fuller implications of Weber’s insistence on value neutrality given that this was part of his long-standing conflict with university faculty who, he felt, improperly used their positions of authority to impose their value systems on unwitting students snared by a defective German educational system. Similarly, Weber’s view of science as an enterprise that offered no ultimate meaning stood, for him, in tragic contrast to the sphere of politics, in which dying in battle—like in the fighting that had recently ended in Europe—could give meaning to the life and death of anyone who had been a warrior on behalf of the impersonal ideals of his vocation.

By recalling “Science as a Vocation” as a historical artifact, this workshop aims to recover what Weber intended with key words like “science,” “values,” and “vocation.” In so doing, the workshop is intended to establish common ground that will serve as a basis for further consideration of the limits—as well as the fruitful implications—of the essay for scholars today who are confronting empirical realities that had not encumbered Weber. In the 90 years since the lecture, scientists working on weapons development, biomedical research, environmental assessment, and social surveys, to name a few areas, have at times felt and acted in ways quite consistent with Weber’s portrait of the modern world (if not always in concert with his instructions for how to be a good scientist).

They have, for example, worried about the potentially violent and exploitative consequences of their work and about the implications of doing research with funding from states and corporations. At other times, they have defied what Weber claimed to be conditions of modernity. Scientists have contradicted his assumption that there are unbridgeable divides between so-called value spheres, for example, when they have resisted condoning off their roles and compartmentalizing their views as scientists, activists, consumers, politicians, and believers. Such challenges to Weber’s ideas have encouraged fruitful revisions to scholars’ frameworks for studying science and scientists. For example, scholars have loosened Weber’s strict division between facts and values, and erased his rigid boundaries (both physical and cognitive) between competing value spheres. Weber’s old puzzles have also sustained scholars who, for instance, are concerned about how scientific experts might be involved in political decision-making in democratic societies. Perhaps most powerfully in their critiques of “Science as a Vocation,” scholars have secured its enduring place as a vital text simply by remaining in conversation with it.

In sum, this workshop aims, first, to build a common knowledge of “Science as a Vocation” by recalling the key arguments, concepts, and assumptions that Weber embedded in the lecture, and then to examine how these ideas have endured for scholars in the history, sociology, and anthropology of science both as actors’ categories and as our own analytic categories.

6:15 “Capitalism and ‘Science as a Vocation’”
Charles Thorpe, UCSD

6:45 “Social Science as a Vocation on Holiday”
Michael Lynch, Cornell

Lodging for participants is at The Homestead, 1625 Hinman Ave.

Presenter: Michael Pettit, York University
“The Science of Deception: The Human Sciences, the Law, and the Making of American Commercial Life”

SPONSORS: School of Communication, The Klopsteg Fund, Department of Sociology, and Working group on Science and the Public